The Quillian Sector (1978) is nineteenth in the long-running science fiction series, the Dumarest saga by E.C. Tubb.

Some background:
The Dumarest novels are set in a far future galactic culture that spread to many worlds. Earl Dumarest was born on Earth, but had stowed away on a spaceship when he was a young boy and was caught. Although a stowaway discovered on a spaceship was typically ejected to space, the captain took pity on the boy and allowed him to work his passage and travel on the ship. By the time of the first volume, The Winds of Gath, Dumarest has travelled so long and so far that he does not know how to return to his home planet. Perplexingly, no-one has ever heard of it, other than as a myth or a legend. It’s clear to him that someone or something has deliberately concealed Earth's location. The Cyclan, an organization of humans (cybers who are surgically altered to be emotionless, and on occasion they can link with the brains of previously living Cyclans, in the manner of a hive mind process, seem determined to stop him from locating Earth. The cybers can call on the ability to calculate the outcome of an event and accurately predict results.

An additional incentive for the Cyclan to capture Dumarest is that he possesses a potent scientific discovery, stolen from them and passed to him by a dying thief, which would inordinately amplify their already considerable power and enable them to dominate the human species. Also appearing in the books is the humanitarian Church of Universal Brotherhood, whose monks roam many worlds, notably every world where there is war.

Long before the Borg of Star Trek, the Cyclan was assimilating humans, absorbing them into the collective consciousness.
*** 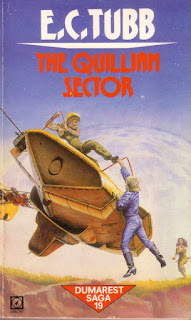 The Cyclan know that their prey Earl Dumarest is among the worlds of the Rift and Cyber Caradoc is assigned to find him. And to aid him he has employed the greatest hunter of a hundred worlds, Bochner, who is not deficient in vaunting hubris. They make uneasy travelling companions. The cyber without emotion and the hunter who thrives on the thrill of ‘waiting for the quarry to appear, to aim, to select the target, to fire, to know the heady exultation of one who has dispensed death.’ (p14)

Finally they enter the Quillian Sector, ‘The place where space goes mad. Where the suns fight and fill the universe with crazed patterns of energy so that men kill at a glance and women scream at imagined terrors…’ (p17) Navigating through this mad sector is the spaceship Entil, and Dumarest is a crew member.

The Cyber is on their trail, but the strangeness of the sector hampers their tracking ability…

At the Entil’s last stop they picked up passengers and dropped off others, and Bochner came aboard as a passenger; bear in mind, the Cyclan want Dumarest alive.

Soon, on the Entil there is jealousy (concerning the charms of the female engineer Dilys) and sabotage. ‘Once the shimmering haze of the Erhaft field was down the ship dropped to below light speed, to drift in the immensity between the stars, to be vulnerable to any wandering scrap of debris which might cross their path – motes which could penetrate the hull and larger fragments which would vent their kinetic energy in a fury which would turn metal into vapour…’

The ship crash-lands and the survivors, including Dilys, Bochner and Dumarest must face nightmare creatures and privation – and a confrontation with Cyber Caradoc.

The pace never lets up. This is yet another fascinating and inventive adventure.

True, Tubb sticks to a tried and tested – and clearly popular – formula, with Dumarest constantly moving between planets and civilisations, encountering women who find him attractive, fights monsters and villains, often in arena scenarios, and by luck and guile evades the clutches of the Cyclan cybers. In its day, in the 1970s, if the special effects had been up to it, the Dumarest Saga would have made great television.

Editorial comment:
The editor missed the transposition of the spaceship name from Entil to Eltin! (p34)
Posted by Nik Morton at Saturday, January 26, 2019